The Guadalupe Tourist Information Office is in the Plaza de Santa María square, in front of the main façade of the Royal Monastery of Santa María de Guadalupe.

The Royal Monastery of Santa María de Guadalupe is one of the best exponents of peninsular Mudejar, declared a World Heritage Site by Unesco in 1993. A monumental monastery that given its artistic and cultural evolution made it the most crowded pilgrimage centre of the Kingdom of Castile.

Strolling through the streets of Puebla de Guadalupe means being immersed in the historical artistic ensemble with arches on the access to the enclosure, it means getting lost in the Jewish quarter and seeing and getting to know the many arcaded houses, pilgrims’ hospitals and churches.

The town’s gastronomy has much to offer and is varied, starting with the legacy of convent cuisine transmitted in the stoves of the Monastery of Santa María de Guadalupe, the PDO Queso de Ibores cheese in oil, paprika, fresh, cured and semi-cured, highlighting the Los Ibores cheese cake and the PDO Villuercas-Ibores-Jara honey. 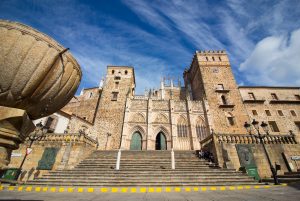 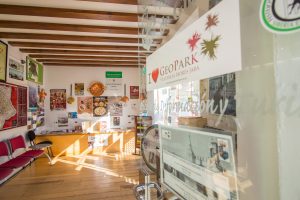 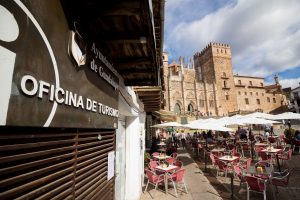 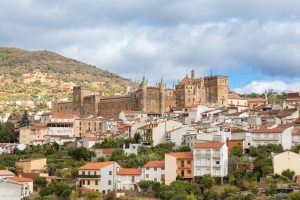