Details about the event:

This event goes back to the founding of the city in the Middle Ages and its traditional weekly market.

The fair was held after the harvest, when the shepherds and farmers coming from the valleys around the city arrived with their products and made their different commercial transactions.

This tradition has been maintained over the years and has gradually acquired a festive tone that gives it a touch of modernity, and that has given it recognition as a Festival of Regional Tourist Interest.

At present, the traditional fruit and vegetable market, the sale of sausages, cheeses, sweets and liquors at the Plaza Mayor and the stands contest, all take place along with the many cultural activities that begin a few days before.

The festive day ends on Tuesday with the traditional stands contest, drummers and a great parade.

You love traditional food markets and you like to enjoy good food and drinks with live music in a festive atmosphere. 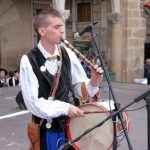