Details about the event:

This festivity has its origins in the time of Arab occupation of the Iberian Peninsula, in the year 1234 approximately, and it commemorates the battle that was fought in the Sierra de San Cristobal between the Arabs and Christians that inhabited in that place. The battle ended with the victory of the Christians, who were rewarded with bread and goat cheese.

Activities in the programme include hiking in the Sierra de San Cristóbal, guided tours, free tastings of tapas of Arabic and Christian recipes, gastronomic workshops.

It is worth noting the traditional free tasting of bread, cheese and wine for all those attending the town square, recreating the one made in the Twelfth century on the victory in the mentioned battle.

The most popular moment is the Tabua (bulrush seed), which once ripe crumbles and is thrown to the crowd as a sign of congratulation for the great victory achieved, turning the streets of Zarza de Montánchez into a great white mantle. 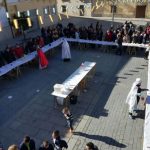